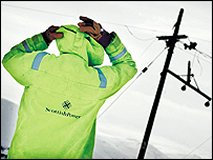 Employment news has not been promising in the recent past which is why the creation of 1,500 jobs is big news in Scotland. The giant energy corporation, Scottish Power, has announced its plans to add workers in order to complete upgrades over the next 10 years to its electricity network.

Plans involve spending a projected £3bn to increase the use of renewable energy. Work will also include the upgrading of approximately 500 miles of transmission lines (overhead) and further upgrades to about 20% of its equipment.

The purpose of these upgrades is to improve the capacity for transmission between England and Scotland which will, in turn, allow for the transfer of about three times the power than it is currently able to transfer. Scottish power includes a younger, newer workforce in their projected budget as many current workers are said to be ‘aging.’

However, in a statement released by chief executive Frank Mitchell, the reason for the investment is quite clear. The Scottish Power Energy Networks need to meet with the requirements of the 21st Century with a modern network that provides for renewable energy and reliability for anyone generating some or all of their own power.

He further notes that Scottish Power’s commitment extends to the investment of billions of pounds in employment opportunities and the upgrade of their transmission network. In an effort to augment a workforce that is aging, Mitchell is looking to encourage ‘new blood’ in the field.

Much of the focus of new sustainable energy will be offshore waters where the company hopes to harness as much as 10GW by the year 2020. This is in addition to other sources of renewable energy, and it is of vital importance to the plan to have the capacity to distribute power when and where it is needed.

Not only will jobs be created and revenue pumped into the economy but cleaner sustainable energy will allow for residential and business accounts to save money on electricity whilst feeding excess into the grid.