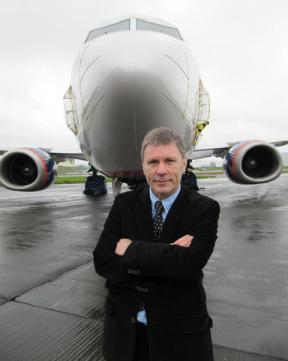 While he may be best known for his remarkable singing voice, heavy metal legend and Iron Maiden front man Bruce Dickinson has another talent: aviation. The well-known British rock star is planning a new investment in a small Welsh air company that he believes could grow into a 1,000-employee enterprise within a decade.

The rock star, whose net worth has been estimated at upwards of £60 million, has invested in Cardiff Aviation, a small Welsh plane maintenance company. Alongside business partner Mario Fulgoni, the Iron Maiden superstar believes that, over the next few years, the company could grow into one of Britain’s leading airlines.

The investment in Cardiff Aviation isn’t Dickinson’s first foray into the air travel business. The rock star, who has been flying planes professionally since the early 1990s, also worked for Astraeus. The Iceland-based airline filed for bankruptcy in 2011, leaving Dickinson – aside from his full-time rock job – out of work.

It was at this point that the rocker grew interested in investing in air maintenance businesses, particularly those located in Wales. South Wales is a hub for the airline industry, with a variety of manufacturers and maintenance plants located along the country’s southern coastline.

Dickinson’s business has grown from a small ‘one-stop shop’ into a formidable air maintenance enterprise, employing over 60 people. The company pays its salaries from profits and is planning to take on additional investment, discussing the option with a variety of venture capitalists.

In an industry where outsourcing is the norm, it’s refreshing to see such a notable example of at-home service success. As the air travel sector becomes increasingly competitive, firms like Cardiff Aviation – which plans to become an airline – face a very interesting – and particularly very lucrative – economic landscape.