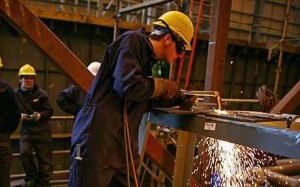 Amidst the growing concerns surrounding the debt crisis in the Eurozone, amazingly Britain’s manufacturing sector is still going strong. In fact, it is forecast that factories will even be gaining momentum in the months to come.

Based on a survey of 510 companies, almost 1/3 stated that their books were above what is normal for this time of year but an almost equal number of firms responded that their productivity was at or below what is expected. In all, the balance was up 1pc which is far above the average over the long term which was down 18pc.

According to Richard Woolhouse, head of fiscal policy for CBI, order books are faring well and expectations for growth in output are above the historical average. As well, inflation does not seem to be looming on the horizon as British manufacturers are reporting that they are not intending to increase prices any time soon.

However, optimism is somewhat blunted by growing fears that the Eurozone and the United States are on the verge of economic collapse. Even so, the fact that the manufacturing sector in the UK is still going strong indicates that recovery has not completely stalled.

In the final analysis, UK analyst Samuel Tombs cautions that even though there is a bit of reassurance in the manufacturing forecast, sometimes these surveys are a bit too optimistic and that official data tells another story altogether. It is still too early to tell if this is premature optimism, but everyone’s fingers are crossed.