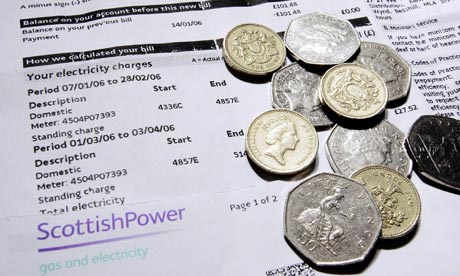 Many families in Britain are facing a huge increase in their gas and electric bills, according to uSwitch.com.

The research highlighted several providers, including Scottish Power who recently announced a price rise of an average 19% on gas and 10% on electricity.

Raymond Jack, Scottish Power’s UK retail director, said: “We understand times are difficult for many people, and we have done what we can to absorb these additional costs for as long as possible to minimise the impact on our customers.”

“The rising burden of non-energy costs faced by Britain’s energy suppliers – including the cost of meeting government environmental and social programmes and the cost of distributing electricity on the national grid – has also placed further upward pressure on energy bills.”

Not only is the problem relevant to Scottish Power customers, as rival companies; British Gas, Scottish and Southern, E.ON and npower aim to follow with increasing prices which will be effective from September 2011.

The Mirror reports that “British Gas alone made £1.15billion profit last year and blamed the rise in bills on increased wholesale energy costs which have jumped 30% in the past year.”

As energy suppliers continue to reap the rewards of healthy profits, customers have been urged to regularly check their gas and electric usage costs on a monthly and yearly basis.

According to comparethemarket.com “16% of bill payers have no idea how much they pay, indicating that the average household could save up to £200 annually on their energy bills.”

The good news is that customers are being advised on how to handle the increase in energy bills by cutting the cost of their initial price rise.

Experts are suggesting that energy users should compare their regular bill amounts and check how much they have increased by. With this fact confirmed, there may be cheaper energy suppliers that are offering competitive rates.

There are also fixed tariff rates available to guarantee that consumers won’t be affected by a price rise; however, advisors are warning that there could be a high cancellation fee depending on a customers original supplier contract.

To significantly improve your energy bills, check and compare your household energy figures at http://www.uswitch.com/.